skip to main | skip to sidebar


The Sythian people were a nomadic people originally of Iranian stock, who migrated from Central Asia to southern Russia in the 8th and 7th centuries BC. The Pazyryk were the ancient horse-riding pastoral nomadic people who lived in the Altai Mountains and steppes lying in Siberian Russia. 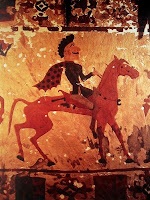 
The amazing burials preserved in permafrost of the Pazyryk culture closely resemble (some say they are the same as) the Scythian people to the west. The burial sites (Turkic: kurgans) some found by archeologists beginning in the 1920s, are now part of a UNESCO World Heritage Site.

Siberian animal style tattooing is common of the Scythian tattooed mummies found among the Altai steppes, with wood ash believed to be used as the colourant, as in similiar cultures.

A gilded wooden figurine of a deer from the Pazyryk burials, 5th century BC


The most striking discovery among the kurgans was of a Pazyryk chief, fully tattooed, as pictured below. An unconfirmed report from one Russian archeologist is that even his penis was tattooed.

The best preserved tattoos were images of a donkey; a mountain ram; two tylised deer with long antlers; an imaginary carnivore; griffins; two deer; mountain goat; fish; monsters; and four running rams. Also the chief's back is tattooed with small circles in line with the verterbral column, seemingly for therapeutic reasons. As pictured above.

The chief's right shoulder.
Another startling discovery was that of a tattooed young maiden, well-preserved, her hair still blonde. The animal style tattoos on her skin were preserved: creatures with horns that developed into flowering forms. Her thumbs and fingers were also tattooed. 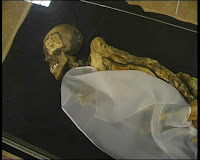 Dubbed the "Ice-Maiden" - believed to be a Ukok Princess

Ice-Maiden
Much information of these mummies is closely guarded, and few have seen them as countries quibble over ownership. What can be gathered is that like tribes and cultures around them, they were a horse-worhsipping, nomadic race of mixed descent. The tattoos were probably, like cultures of similiar eras, a mark of their warrior status. The Ukok maiden is though to be a warrior-priestess, given that she was buried as to resemble Epona, the Euro-Celtic horse-goddess.
One of her tattoos is so similar to one of the chieftan's as to have been applied by the same artist, or one working from the same pattern.
The same fine needles used for their felt-work are believed to have been used for their art of tattoo.
Sources:
http://www.tattooheaven.com/CentAsia.html
http://www.britannica.com/EBchecked/topic/530361/Scythian
http://en.wikipedia.org/wiki/Pazyryk
http://hermitagemuseum.org/html_Ru/03/hm3_2_7b.html
http://en.wikipedia.org/wiki/File:Scythian_tatoo.jpg
http://en.wikipedia.org/wiki/File:Mummy_of_the_Ukok_Princess.jpg
http://hermitagemuseum.org/html_Ru/03/hm3_2_7f.html
http://www.tattooschreiber.de/mediac/400_0/media/DIR_109/TattooSchreiber.de~p34.jpg
http://www.hermitagemuseum.org/
Posted by thedreamersbeacon at 6:01 PM